What Is In Hair Color And How Does It Work?

Archaeological evidence shows that the use of dyes by humans dates back to the Palaeolithic period. Early humans used the natural mixture of iron oxide, clay, and sand in the dirt around them to decorate their dwellings, fabrics, and bodies. It wasn’t too long until they began to apply the dyes to their hair.
Greeks and Romans also created a hair-dyeing recipe using lead salts to make permanent black hair dye. When the direct application of lead proved too toxic, the Romans changed their black dye formula to one made by fermenting leeches for two months in a lead vessel. Only slightly less gross to think about is the option of red dye formed from a mixture of beech wood ash and goats’ fat.
During the early years of the Roman Empire, prostitutes were required to have yellow hair to indicate their profession. While most wore wigs, some soaked their hair in a blend of ashes from burnt plants and nuts to chemically achieve the color.
​The game changer happened in 1856 when English chemist William Henry Perkin accidentally created the first synthetic dye. He was attempting to synthesize a malaria medication using coal tar, but instead ended up with mauve. Perkin’s chemistry professor August Wilhelm von Hoffman discovered the responsible molecule was para-phenylenediamine, a clear liquid which develops color when oxidized.

By 1907, chemists had further realized that if they added a coupler (a carbon here, a few nitrogens there), they could manipulate the chemicals and multiply the color choices. French chemist Eugene Schueller took this information and created the first commercial hair color, dubbing the new product Aureole, the company you now know as L’Oréal. Throughout the early and mid 1900s, hair color advanced boasting longer staying power and hydrogen peroxide-free formulas.
This is also when the important distinction between hair color and dye was defined. While stylists can apply pigments to your hair; they are more often applying a mixture of chemicals to initiate color formation. The individual molecules have to be linked together before they create color. Scientists still commonly use the word ‘dye’ but any hair stylist will tell you - we dye Easter eggs, we color hair.
So, what is in the chemical mixture of hair color?
Today, modern hair color is formulated using a combination of natural and synthetic components to achieve subtle differences in shades and tones.  North Carolina State University researchers have created the largest publicly available chemical database of hair color substances containing detailed information about the structure and properties of 313 substances in current and past commercial hair colors.
Common hair color ingredients are: 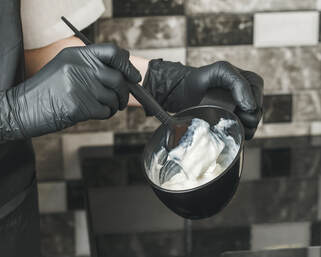 Ammonium hydroxide is an alkaline solution formed when a small amount of ammonia reacts with water molecules. It opens the hair cuticle providing space for color to penetrate the cortex of your hair.
​
​Alcohol: Most hair color formulas contain some form of alcohol. Polymer scientist and cosmetic chemist Tonya McKay tells Naturally Curly readers that short-chain alcohols are drying agents but, other long-chain alcohols such as cetyl alcohol and stearyl alcohol aren't so bad. "Larger alcohols are typically derived from natural sources and have 12 or more carbons per molecule.” This higher amount of carbon content creates an oilier (also referred to as 'fatty') result, and will give hair a smoother, softer feeling.
​Whether short or long-chain, alcohol increases absorption, meaning that your hair can “drink in” more product, leading to seamless color.
Hydrogen peroxide (also known as the developer or oxidizing agent) is added in varying forms and strengths to help initiate the color-forming process and create longer-lasting color. The more you are lightening your hair, the more likely your colorist is using a higher developer (more hydrogen peroxide). In its purest form, and in excess, hydrogen peroxide is toxic to the human body. But fear not—the hydrogen peroxide used in hair dye is diluted multiple times to ensure safety.
Pigments: The discovery of para-phenylenediamine in 1856 was the first step toward manipulating hair color pigments. Today, hair color manufacturers use a blend of natural and synthetic pigments to achieve desired shades.